Evolution of the Bathing Suit

The evolution of the swimsuit can say a lot about history. The beach in a sense, was the first catwalk, where historical turning points in time began.  Creating dramatic changes that occurred prominently on the beaches of Geneva Lake, North of Chicago city limits. These beaches essentially marked important evolutionary changes in fashions, which are captured in photographs below from the early 1800's on.  Let us look back in time and identify, how these unique customs transpired into what is now known as the swimsuit.
History has an interesting take on men and women's fashion sense throughout the ages. Lake Geneva's beaches have their own interesting stories to tell about the evolution of fashion trends throughout the historic beach scenes illustrated below.  Women would promenade on Lake Geneva's well known beaches wearing full length dresses, parasols in tow, which were the only acceptable clothing trends before the turn of the century.  Bath houses were prominent and bathing in the lake was an everyday experience.  The bathing suit over time has thoroughly influenced the world of fashion, the following are a series of images that capture each era perfectly. 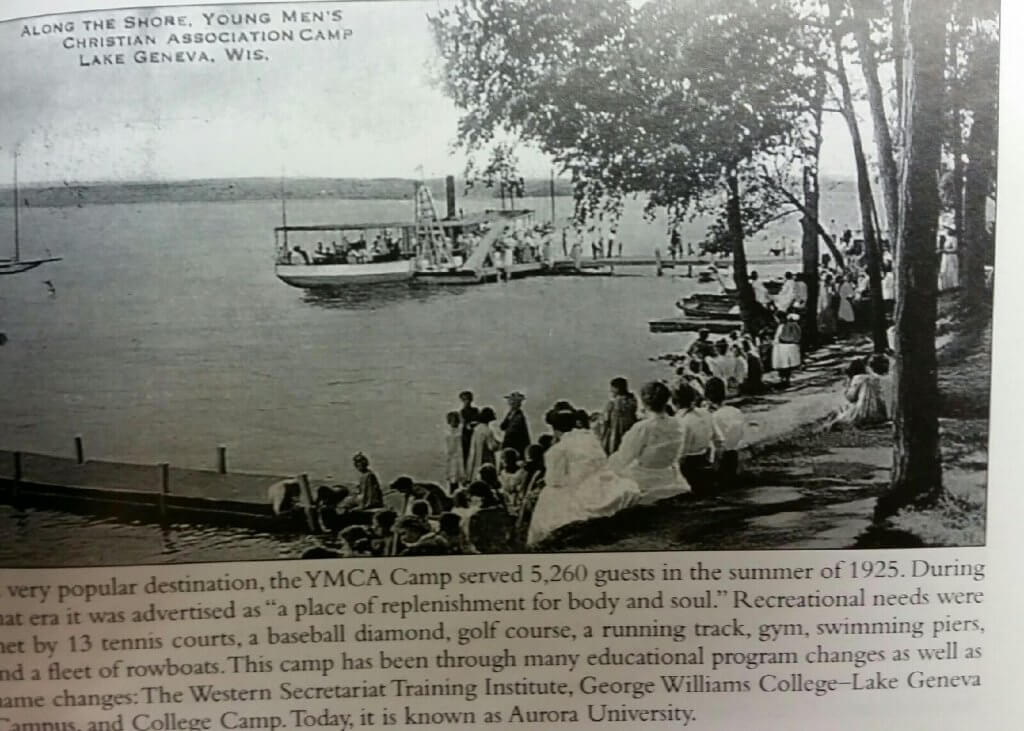 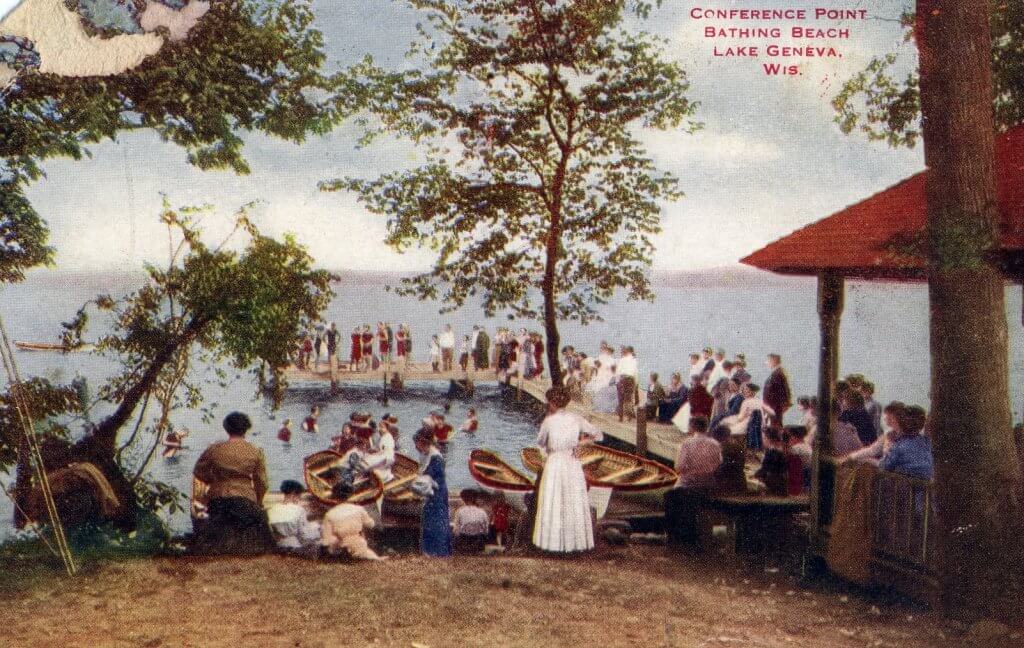 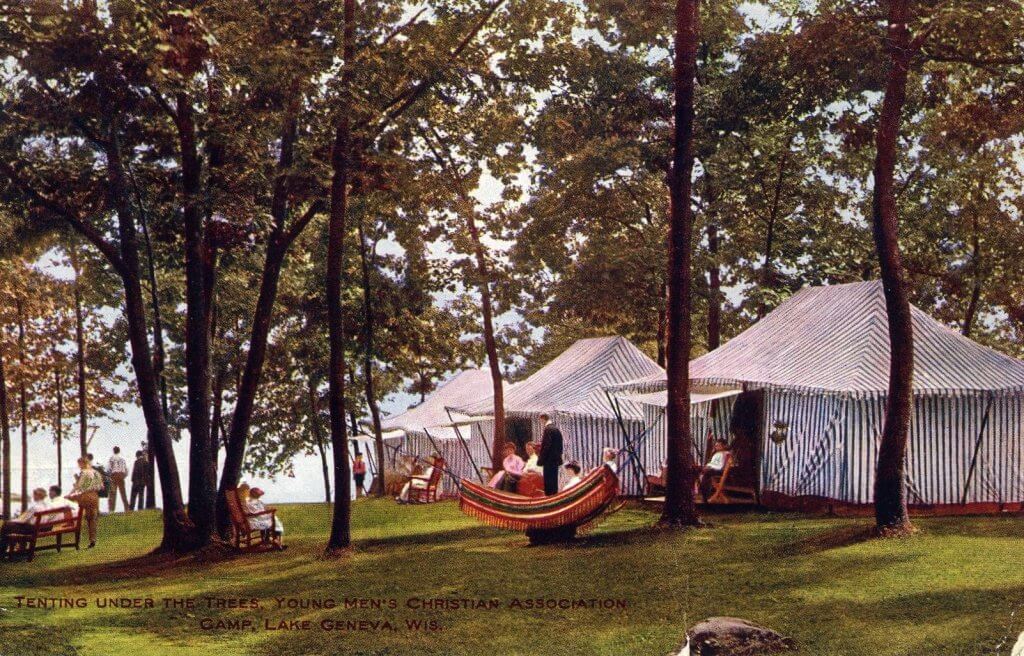 Picture Courtesy of Geneva Lake Museum
Beach fashion was all the craze during the turn of the century and illustrates many untold stories throughout each era.  Lets begin with the year that started it all,1900.  Fashion trends tend to mark poignant changes throughout each generation, making it incredibly simple to spot which decade captured which trend in Lake Geneva's historical beach scenes captured here at Conference Point, a popular bathing beach during the 1900's. 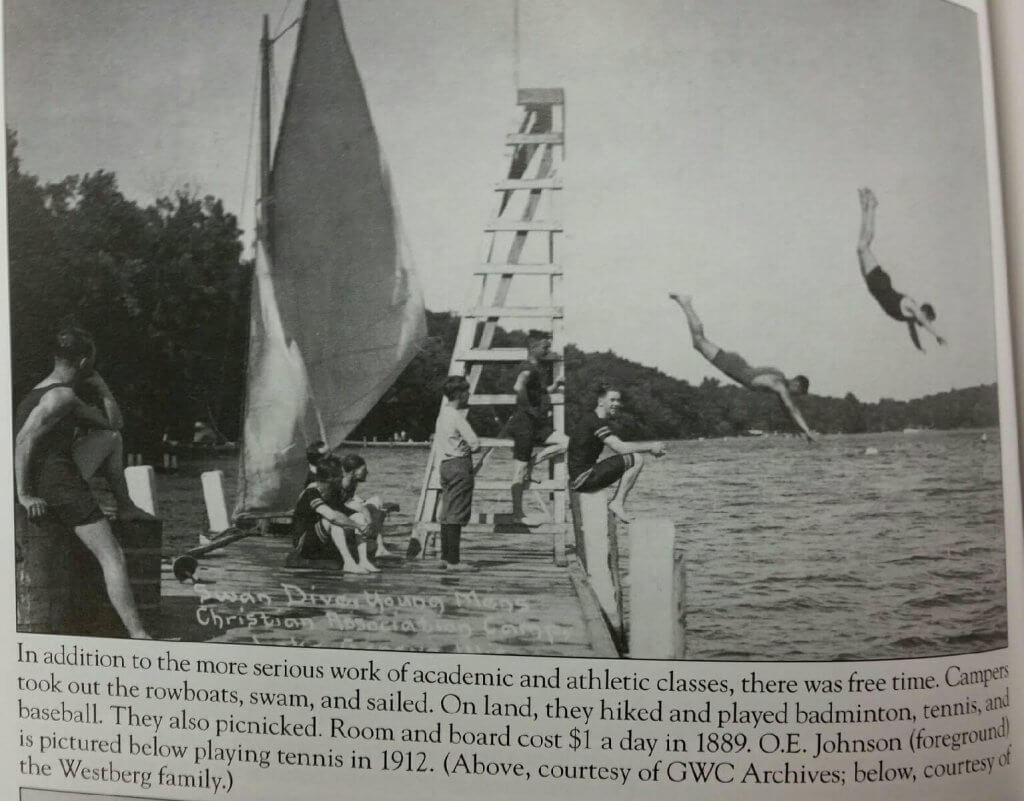 Picture Courtesy of Images of America Camps of Geneva Lake by Carolyn Hope Smeltzer and Jill Westberg, Geneva Lake Museum
For example, the Victorian Age (above) is identified by the beachwear attire, beach tents and bath houses covered the shorelines.  Lake Geneva area citizens would flock to the beach to dip in the cool, crisp water of Geneva Lake.  Wearing full attire, as if it was a fashion show and no accessory was forgotten during a beach appearance.  Less skin was in and the more you wore during your swim/bath was how elegance, proper etiquette and fashion statements were measured.
Prior to the turn of the century, i.e. the mid 1700-1800's, most notably, the modesty eras, no skin was allowed to be shown on the beaches.  Being fair skinned was admired while today it's quite the opposite fashion.  Being formally covered up was the key back then.  In fact, not too long ago, i.e. the mid 1900's, policing was widely accepted on every beach.  They would patrol and measure how low suits/dresses were allowed on public beaches.  Measuring knee lengths of swimmer's suits was the norm then, ruler in tow.  Not only was modesty measured physically, it was also measured with weights, which were sewn into the fabrics of suits/dresses to weigh them down while swimming.  Individual bath houses were also very popular and widely accepted.  The lengthy beach attire was more of a fashion show production rather than a casual day at the beach.
Did you know that early 1900 swimwear was made of wool?  Theory has it, that wool was warmer, so it was decided that suits should be made of this fibrous material.  It wasn't until the Victorian Era ended in 1901, that women started saying so long to long sleeves and dresses at the beach. 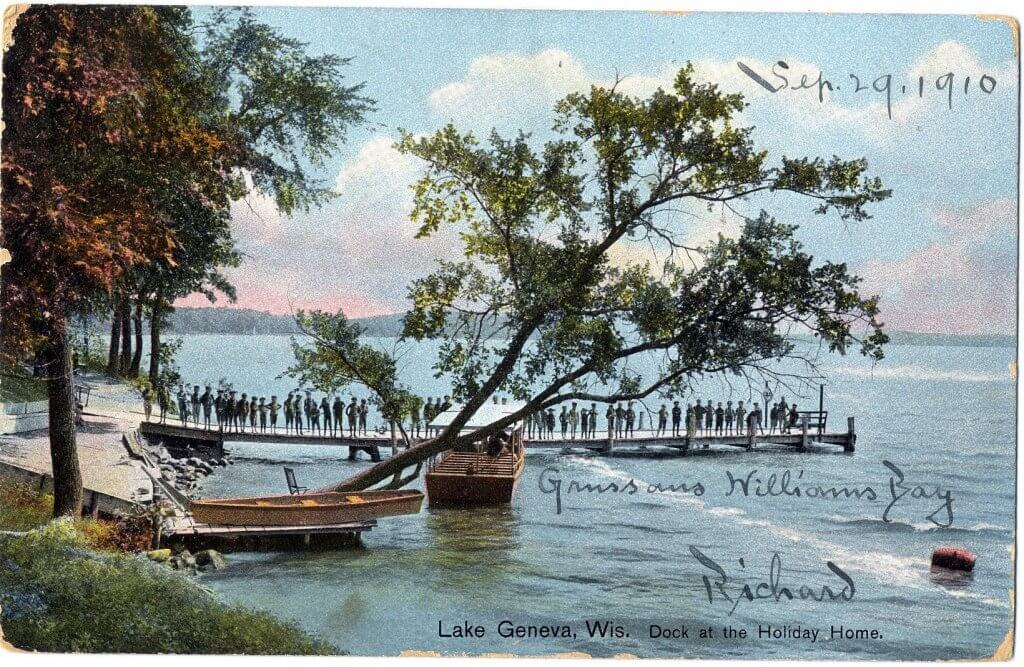 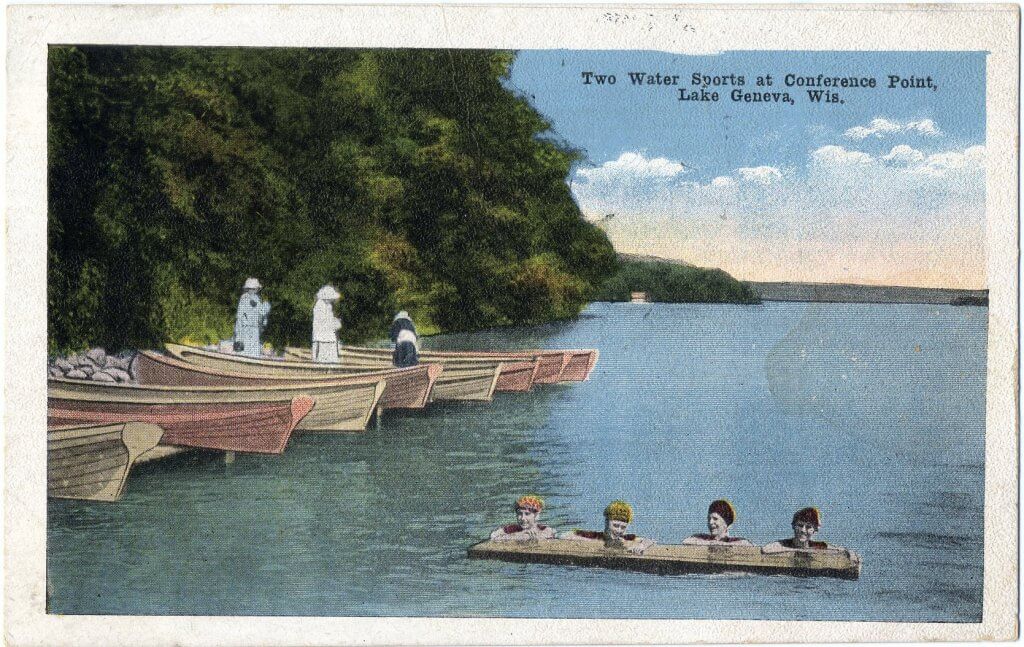 During the 1920's modesty checks were made by the Beach Police!  Yes, today we have the Water Safety Patrol team keeping us safe on the water, but back then they had Police to make sure their suits were not too revealing on the sandy beaches of Geneva Lake.  During this time women would wear swim caps to protect their lovely locks and swim dress, that included a dress with shorts underneath making a two piece that appeared to be a one piece dress. This was the introduction of the Jantzen suit, which was created in 1916.  According to Wikipedia.com, "This suit revolutionized the way swimwear was worn.  Made out of stretchy elastic material and it came in a variety of colors."
The 1920 bathing suits became more of an iconic style throughout its different evolutions. 1920 Men's bathing suits took the same approach.  They consisted of the same stretchy materials and shorts/tank top one piece that started to make its appearance on Lake Geneva beaches.  You can see what men wore during this time in the picture (below), the boat dock scenes. 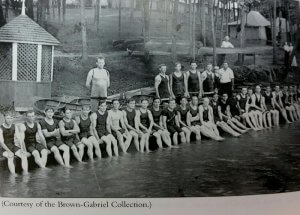 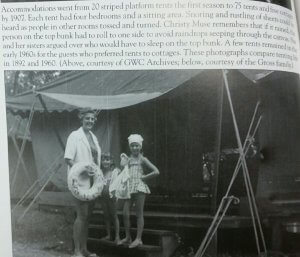 Picture Courtesy of Images of America Camps of Geneva Lake by Carolyn Hope Smeltzer and Jill Westberg, Geneva Lake Museum
According to Goodhousekeeping.com, "The bikini was officially introduced in 1946 at a poolside Paris Fashion Event."  It wasn't until the 1920's and the discovery of the famous Jantzen suit that finally initiated change to occur.
According to Wikipedia.com, "In 1919 and 1920, we advertised Jantzen bathing suits.  It was not until 1921 that Mr. Dodson first conceived the idea of using the name “Swimming Suit” instead of bathing suit. Up to this time we had never heard the name “swimming suit” used, and we had been selling bathing suits for years and had come in contact with all kinds of advertising of these garments, which consisted then entirely of newspaper advertising by retailers, or trade paper advertising by manufacturers. So we are certain the name “swimming suit” was never used in advertising. Mr. Dodson was manager of the Broadway retail store at the time, and I remember distinctly the twinkle in his eye as he suggested the use of the name in our advertising. So from 1921 we discontinued the use of the name bathing suits and used swimming suits in all our copy. Since then many manufacturers throughout the world have advertised swimming suits in place of bathing suits."
It wasn't until the end of WWI that the Jantzen suit was discovered universally when it was illustrated in Life Magazine and Vogue Magazine.  Here are a few different lifeguard uniforms from several of Lake Geneva's summer camps during the 1920's and 1930's. 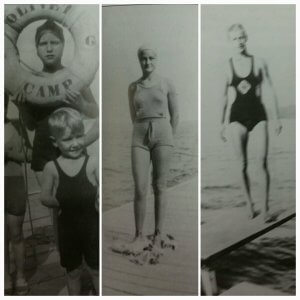 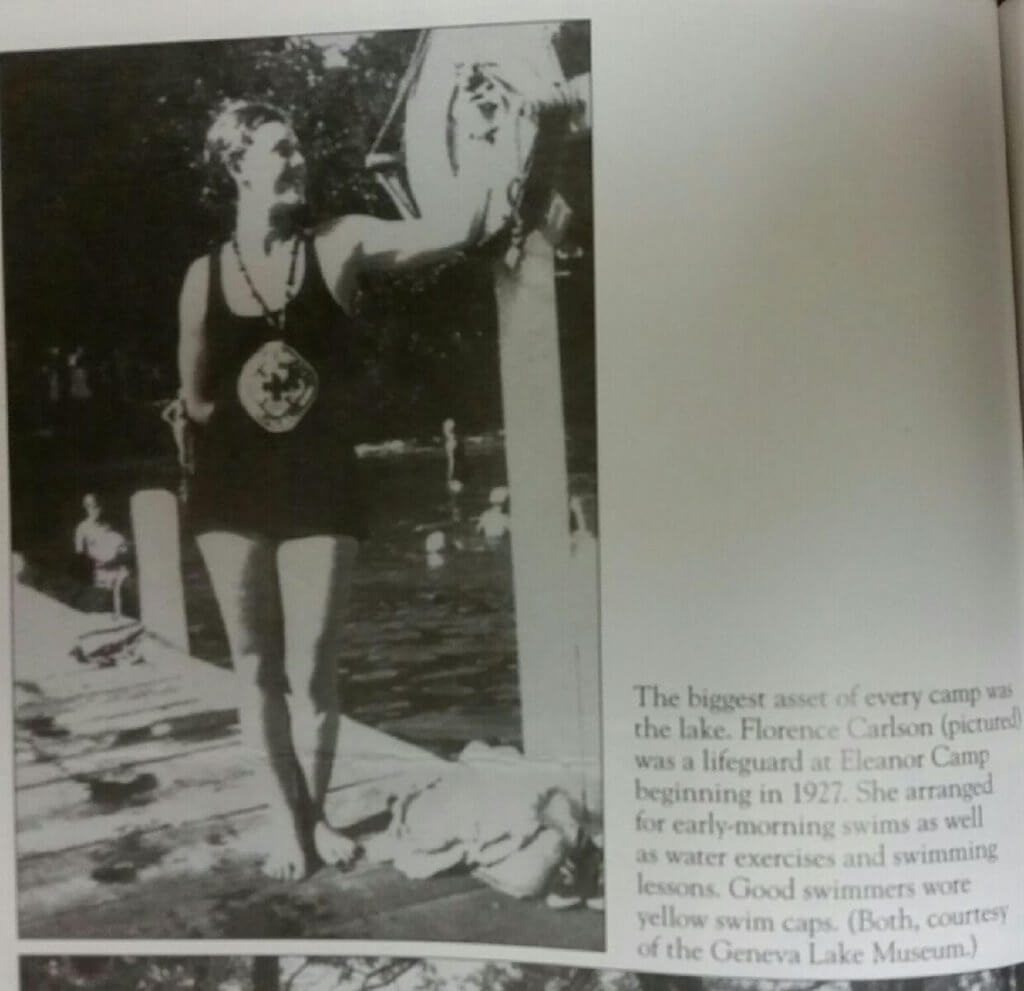 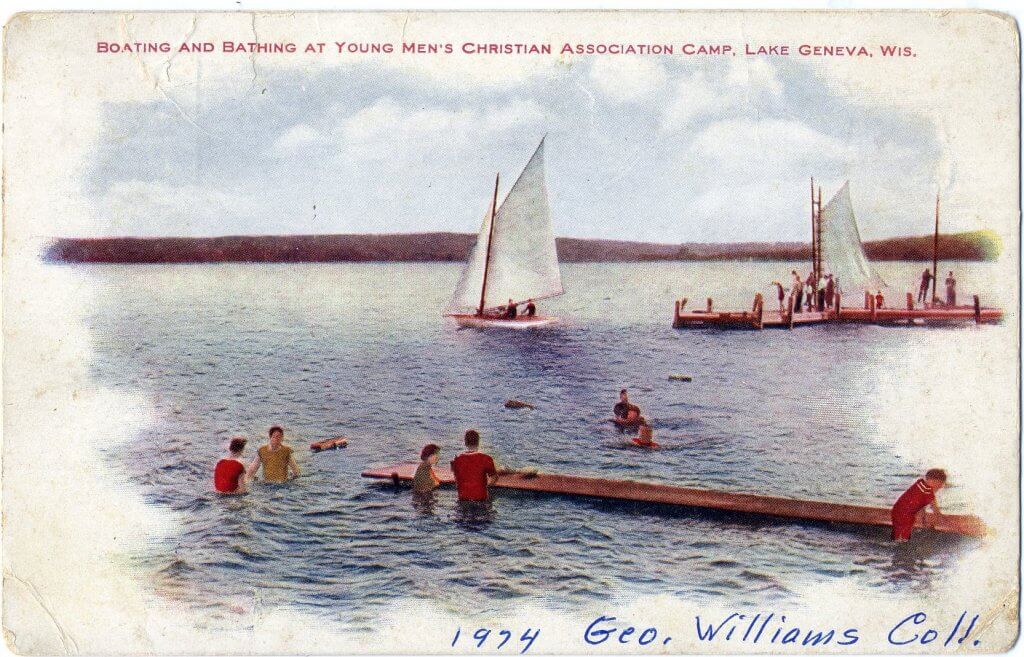 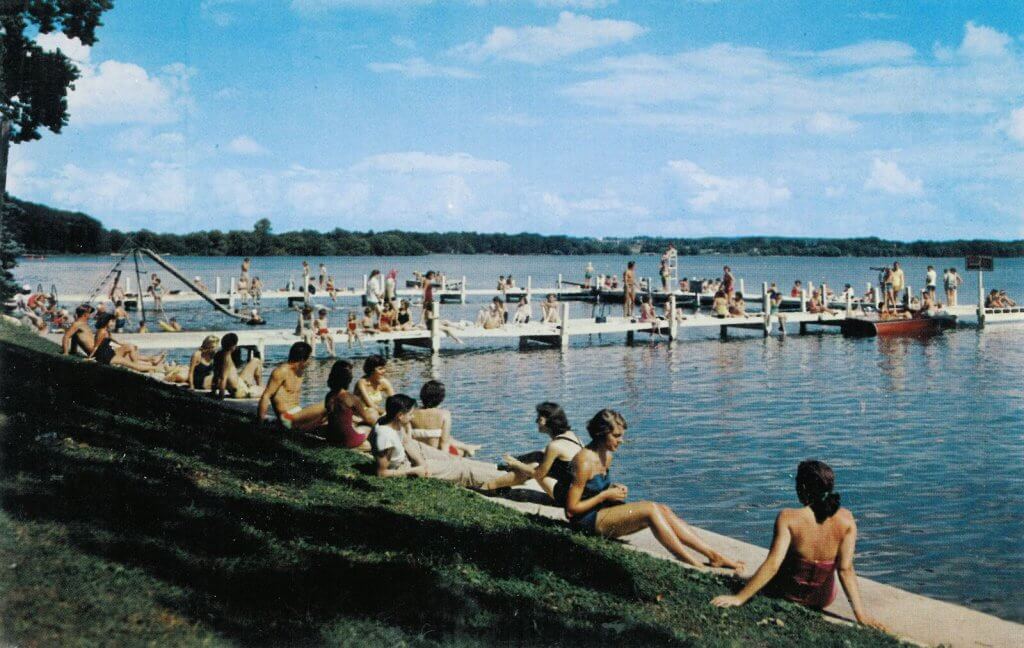 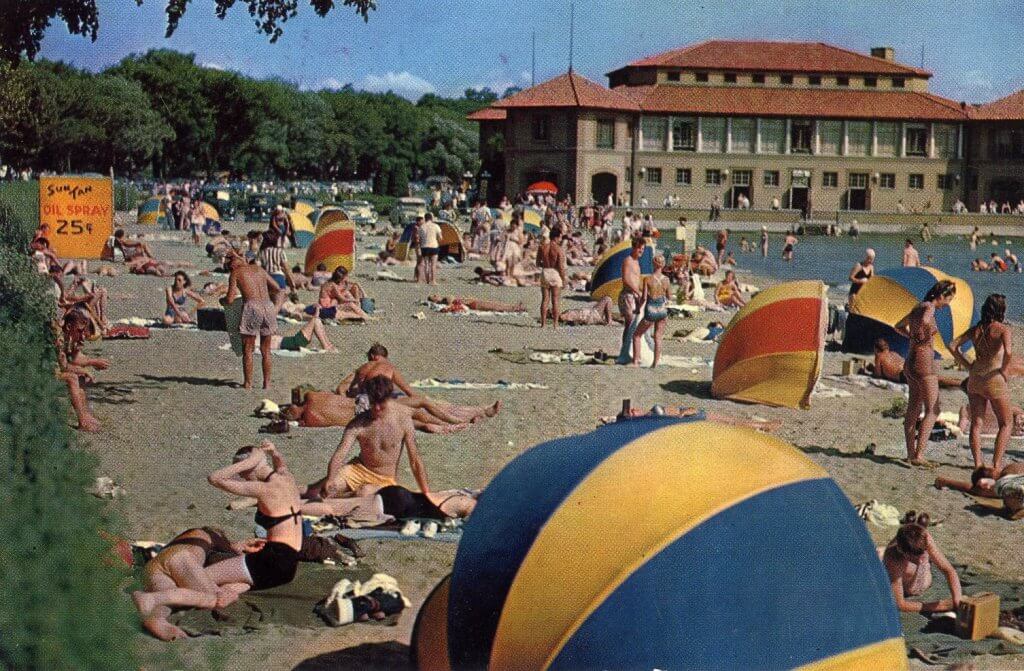 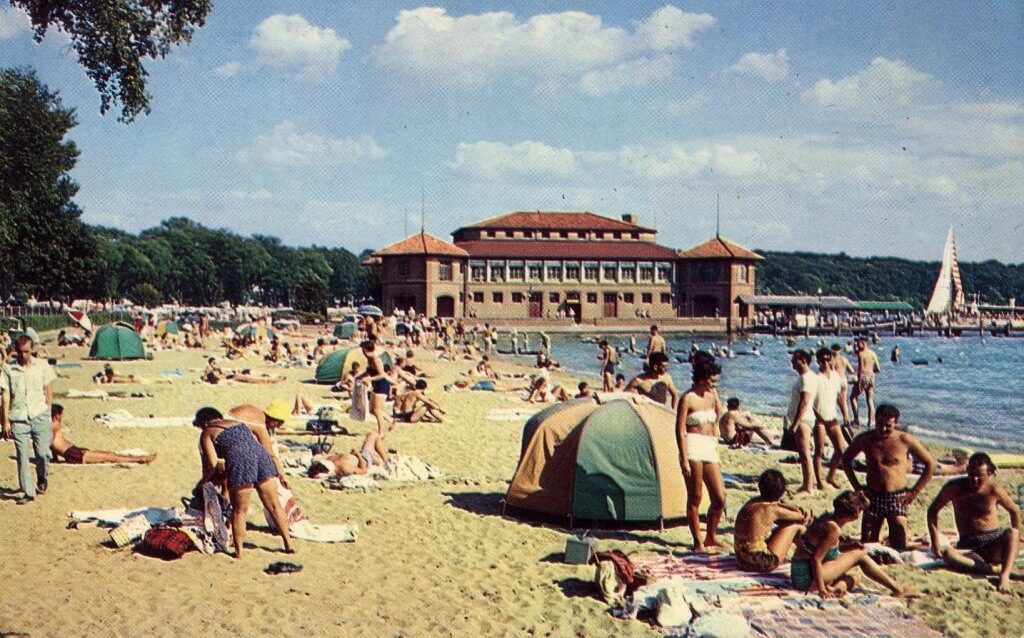 Picture Courtesy of Geneva Lake Museum
As time will tell the suit began to change. Above is an image, transitioning into the modern era, which began to formulate more revealing, form-fitting swimsuits.  Leading to today's beach fashions introduced throughout the 1960's.  As time went on fashion trends changed and bathing suits grew smaller and more revealing.  With time comes change, and different names for beachwear throughout the ages. The only question now is, what does the future hold for the world renown suit of choice?
Works Cited:
Gontcharova, Natalie, and Amanda Hawkins. "The Evolution of the Bathing Suit."Good Housekeeping. N.p., 10 June 2015. Web. 02 May 2017.
"Jantzen." Wikipedia. Wikimedia Foundation, 22 Apr. 2017. Web. 02 May 2017.