A Grand Tale - The History of Grand Geneva Resort & Spa

Once upon a time, nearly a half-century ago, Lake Geneva was quietly hand-picked by Playboy Enterprises to be the site of a glamorous new resort. It would be like nothing the area had ever seen, with picturesque grounds, progressive architecture and nationally-recognized music and entertainment. Taken together, the Playboy Club-Hotel represented the epitome of the era’s decadence and sophistication, a resort where those in the know could ski, horseback ride, golf, dine and be up-close and almost personal to the world’s top performers.

After experiencing ownership changes in the 1980s, and some crazy, eccentric recording studio days, the resort is now under the stewardship of Milwaukee’s esteemed Marcus Corporation. Grand Geneva Resort attracts visitors from around the world to its AAA 4-Diamond getaway in the country, tucked away amid rolling hills, a much-needed retreat from daily distractions. 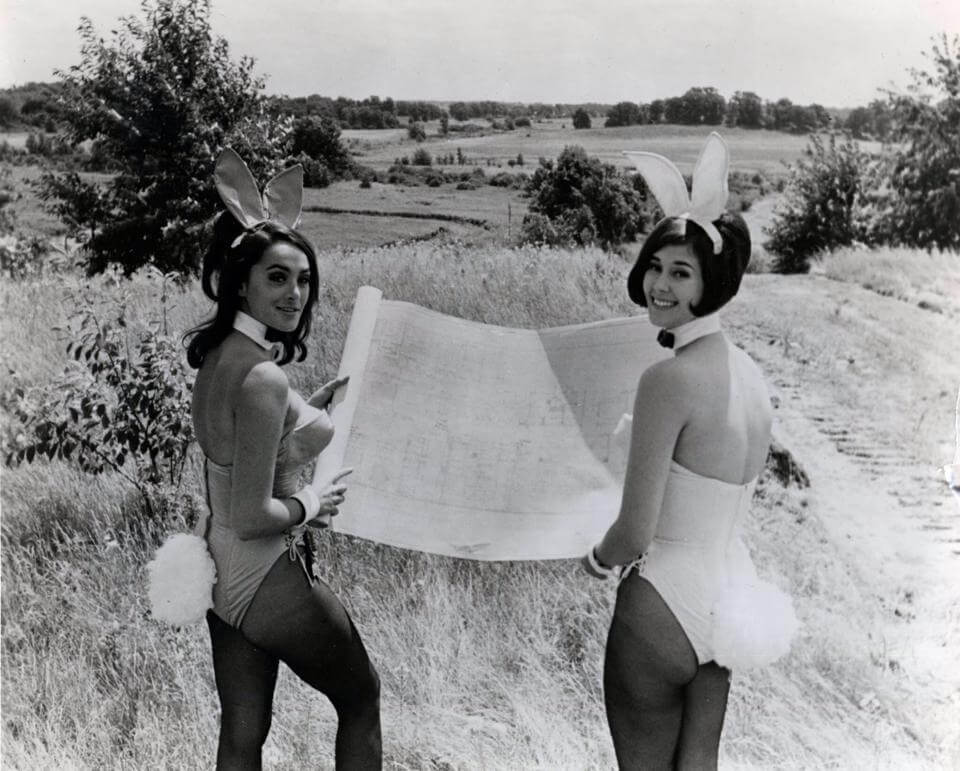 In August, 1966, Playboy founder and president Hugh Hefner arrived at the site of the future Playboy Club-Hotel in Lake Geneva by helicopter for the grand groundbreaking of the new resort. Wearing a hardhat featuring the Playboy logo and surrounded by a bevy of Bunnies in evening gowns, Hefner set off a dynamite charge to signal the official groundbreaking. Local dignitaries enjoyed a gala celebration under a tent while skydivers dropped onto the property, one of whom carried an Olympic-style torch and a Playboy flag to plant in the ground. Playboy had arrived in Lake Geneva as only Playboy could.

Construction on the seven interconnected buildings that would make up the resort took a little over a year. The Lake Geneva Playboy Club-Hotel opened in May 1968, and included the Main Lodge, two golf courses, a ski chalet, a fitness and racquet center, and housing for employees dubbed the “Bunny Dorm.” 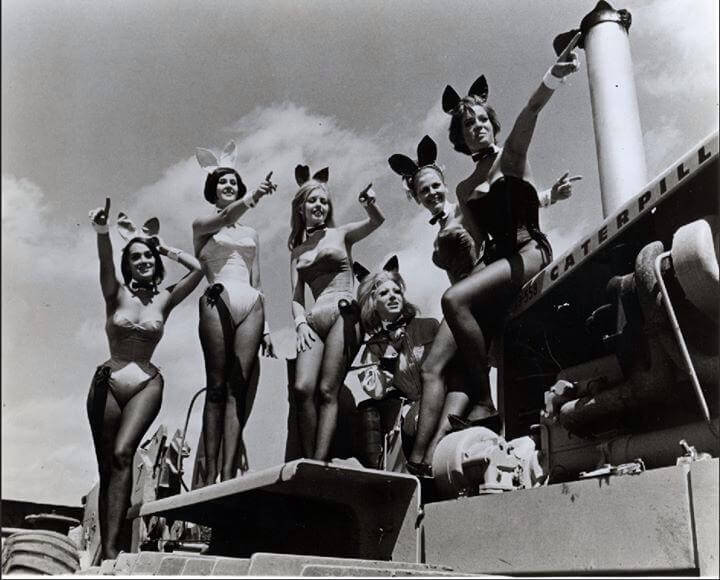 The Main Lodge contained 350 guest rooms, ten meeting rooms, three bar/restaurants (including one that could be converted to a nightclub theater), a dance club, a barbershop/salon and several shops. The architecture was Frank Lloyd Wright-inspired Prairie Style, and the ambiance inside achieved a cutting-edge, modern luxury for the era. The lobby featured a sunken lounge, a glass-backed fireplace, pebble-textured walls and lots of tropical plants. The new resort was the peak of trendy in 1968, and the perfect spot for a couples’ getaway.  According to his daughter Christie, the Lake Geneva resort was one of Hefner’s favorite Playboy properties: “Hef loved the Lake Geneva resort both because it was one of the company’s first resorts and because it was so beautifully designed.”

From the opening of the very first Playboy Club in Chicago eight years earlier, Hefner had worked with a top-notch team of creative minds. For the Lake Geneva resort, he recruited famed golfer Jack Nicklaus to help design one of the golf courses. Bandleader Sam DiStefano transferred from the Miami Playboy Club to handle entertainment at the Lake Geneva club and used his connections to book top-name performers like Peggy Lee, Tony Bennett, Liza Minelli and Sonny and Cher, who shared the stage with DiStefano’s 32-piece orchestra. And Playboy’s Executive VP Arnold Morton (who would go on to found Morton’s Steakhouse, among other eateries), oversaw the resort’s operations. 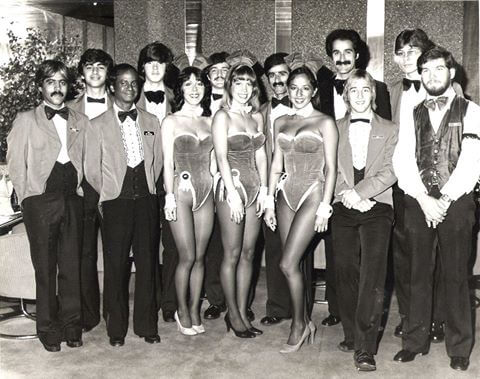 From the day it opened, the Lake Geneva Playboy Club-Hotel was immediately popular with tourists and locals alike. The success of the venture depended partly on the top-of-the-line resort offerings and partly on the gimmick of the costumed Playboy Bunnies themselves. Competition for a Bunny position was fierce, and women selected for the job underwent rigorous training in proper cocktail garnishing, physical presentation and serving technique, among other skills. A Bunny Mother constantly monitored their behavior and appearance, and could issue a disciplinary note for various infractions, including if a Bunny gained five pounds; failure to lose the added weight could result in a temporary layoff. They were trained to be extremely attentive to customers, but to maintain a decorous distance at all times, all while wearing a corseted bodysuit and a pair of three-inch heels. The Playboy Bunnies, and by extension the Playboy Club-Hotel, represented everything that was new and exciting about modern culture in the wake of the sexual revolution. 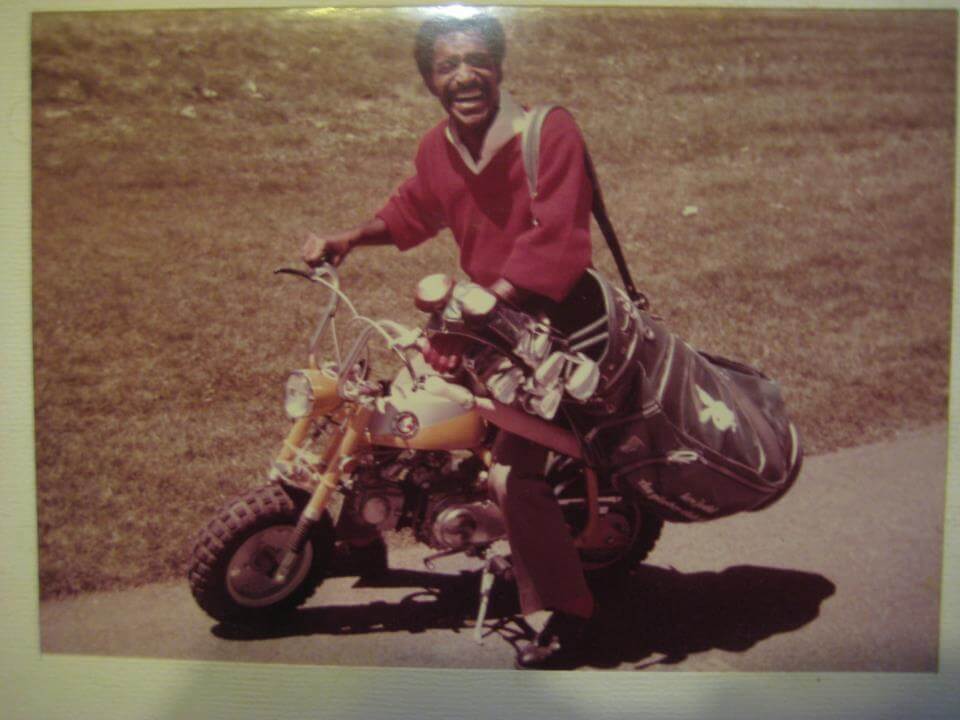 A Little Bit Rock and Roll

The resort’s popularity attracted celebrities, athletes and wealthy guests, and Playboy Enterprises had recently expanded into the music and television industry. Hoping to capitalize on all of these connections, local entrepreneur Andy Waterman negotiated a deal with Playboy to construct a world-class recording studio on the property and lease it to him. Expanding on the business started by local jingle-writers Vern and Jan Castle, where Waterman had previously worked, he renamed the studio Shade Tree Records. It opened in 1978.

Finally, facing pressure from an increasingly digitized music industry, the recording studio shuttered its doors for good in 1995, selling off its state-of-the-art recording console, which is now rumored to reside in the private Chicago studio of R&B star R. Kelly.

“It was great while it lasted,” said Adrian Belew, a former Lake Geneva resident and highly sought-after recording artist who has worked with David Bowie and the Talking Heads. “It was special. I believe that, for me, it helped my creativity to be in that atmosphere. I’m not a big-city person to begin with and I loved living there. The studio was fully state-of-the-art and there was hardly a better studio anywhere.” 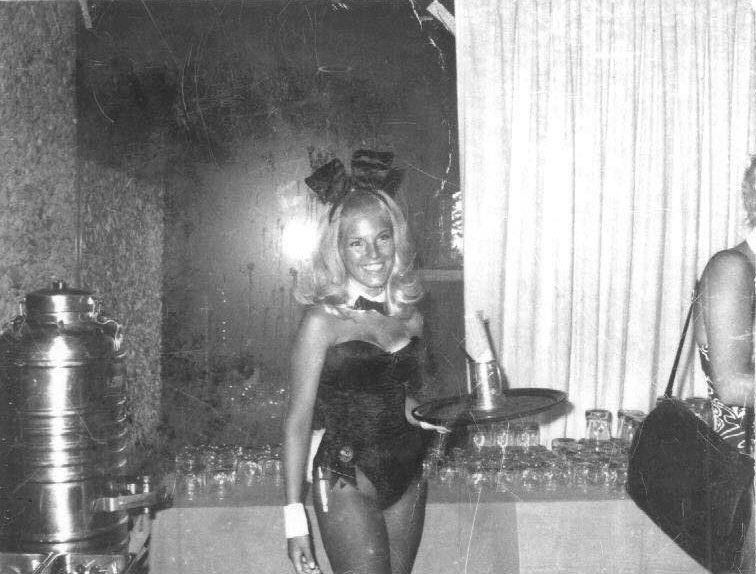 Despite its consistently rocky financial status, the recording studio outlived Playboy’s presence in Lake Geneva by more than a decade. In 1981, citing changing tastes and poor financial performance, Playboy closed all of its resorts to refocus the company’s efforts on its primary market: media. They sold the Lake Geneva resort and property to Chicago-based hospitality group Americana Hotels Corp., for just under $12 million.

But after a few short years, the buildings needed repairs and updates. The ski hill and the golf courses continued to attract big business, but the resort itself couldn’t compete with other nearby options. By 1986, Americana entered foreclosure. In 1988, Americana Hotels Corp. sold the resort to another Chicago-based real estate group, JMB Realty Corp., but they couldn’t save the declining resort either. They opened Americana only in the summer and closed off many of the rooms.

In 1992, JMB Realty Corp. folded and Americana went up for sale at auction. No buyers met the minimum bid. 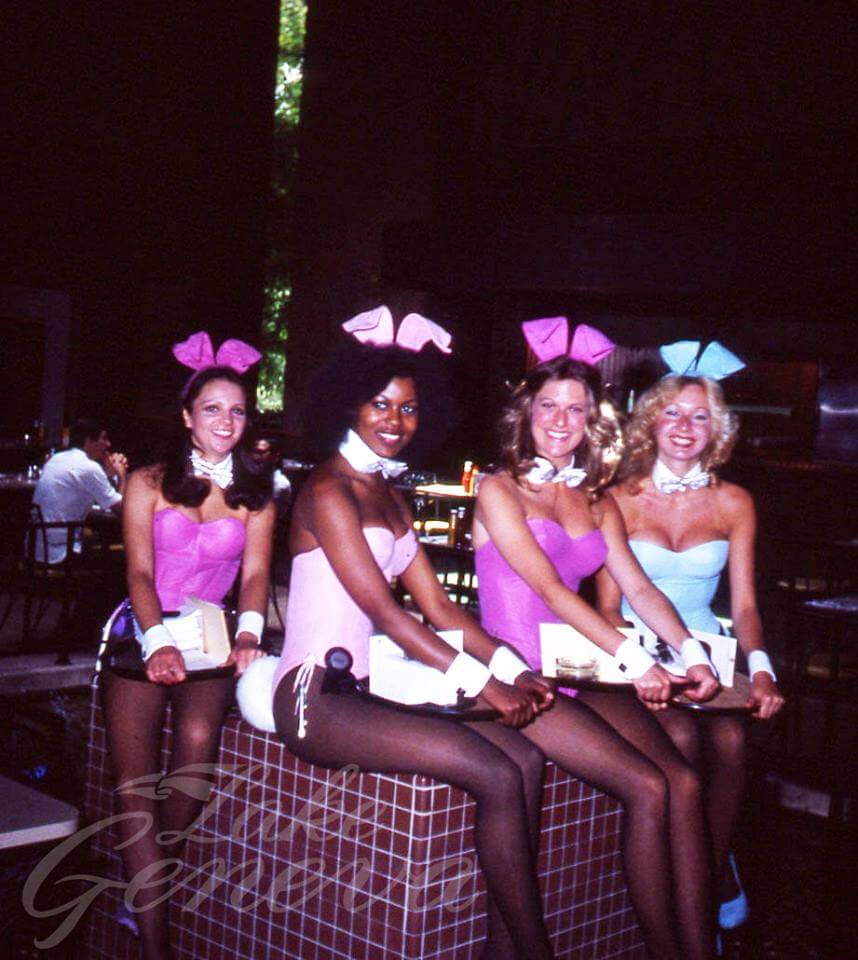 Marcus to the Rescue

In 1993, executives from Milwaukee’s Marcus Corporation came to Lake Geneva to inspect the property. Marcus had a reputation for rescuing run-down hotel properties; decades earlier, the company had saved Milwaukee’s historic Pfister Hotel from the wrecking ball and restored it to its former glory as one of the most luxurious hotels in the city. Despite the significant amount of renovation the former Playboy Club needed at the time, the Marcus team saw potential in the property. “This is one of the prettiest 1,300 acres of property in the state of Wisconsin,” former Marcus Hotel Division President Lee Berthelsen said.

After evaluating business trends, seasonal vacation activity and related hospitality conditions in the area, the Marcus Corporation agreed to buy the former Playboy Club-Hotel for $4.25 million. The company renamed the resort Grand Geneva and immediately began a $30 million project to “restore, renovate and enhance” the buildings and grounds, with the intention of attracting more conferences and large groups, as well as more year-round leisure tourism to the area. They increased the meeting space and added a ballroom for events.

In subsequent improvements over the next decade, Marcus redesigned the two golf courses, added a full-service spa (one of the first in the area), upgraded the ski hill and expanded the ski school, created six outdoor tennis courts, renovated the fitness center and upgraded the equipment and further expanded the meeting and conference facilities.

The new motto for the reconceived resort was, “Minutes Away, Worlds Apart.” Magnuson explains, “We tried to create a place where our target market was within a two-hour drive, but the people who came had the opportunity to experience something you don’t get anywhere else in the Midwest. Whether you’re a group, traveling alone or with a family, you have a destination experience.”

To that end, they added three successful restaurants: Ristorante Brissago, the Geneva ChopHouse, and the Grand Café. In addition to golfing and skiing, the company added new recreation in the form of the Timber Ridge Lodge & Waterpark, a 50,000-square-foot, indoor/outdoor waterpark, and reintroduced horseback riding to the property.

Under Marcus’s management, Grand Geneva Resort also began working closely with the Lake Geneva Convention and Visitors Bureau to establish the area as a desirable year-round vacation destination. To attract visitors during the off-season, they help to sponsor Lake Geneva’s Winterfest and the U.S. National Snow Sculpting Competition annually, and use their expansive property to create a “Christmas in the Country” event that features an impressive holiday light display.

This investment of time and energy has paid off for Marcus. Since they bought the resort more than 20 years ago, Grand Geneva has earned a coveted AAA Four-Diamond rating for 16 consecutive years, one of the most prestigious trademarks in the global travel industry. They’ve been named in Condé Nast Traveler’s Reader Poll for Top 10 Northern U.S. Golf Resorts, given Meetings and Convention’s Gold Key Award; been voted one of the Top 20 Family Resorts by Celebrated Living Magazine; named to U.S. News & World Report’s Top 10 Best Hotels in Wisconsin; given Smart Meetings Platinum Choice Award; and received Meetings and Convention’s Gold Tee Award.

Grand Geneva Resort & Spa has thrived under Marcus’ management. The secret to this success, according to Magnuson, was the company’s decision not to ignore the resort’s famous Playboy past but to embrace and improve upon it: “People fondly remember the Playboy Club, but they would always tell me, the Playboy Club was never as good as Grand Geneva has become.”

Photos credited to "Old Playboy Club - Lake Geneva WI" facebook page.
Thank you to Nei - Turner and The Grand Geneva for providing such a beautiful article!